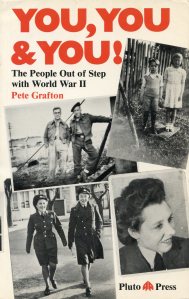 In 1981 YOU, YOU & YOU!  The People Out of Step with World War 11 was published by Pluto Press, London, and went on to sell 4,500 copies.  It has become a well quoted source in subsequent books looking at the British experience of the Second World War. (1)    The book published in 1981 was an edited down version, after a major book deal that was being brokered by Pluto Press with another publisher fell through.  The fully restored original version is now online.

Pluto Press copies of You, You & You! are sometimes available through abebooks and amazon.

A loose trilogy by Pete Grafton covering life in Britain from the 1930s into the early 1950s continues with Len: Our Ownest Darling Girl online at lendarlinggirl.com, and with a photo book of London in the late summer of 1954, at londontown54.com.