Back in the DDR: photos from a recent past

Back in the DDR: photos from a recent past 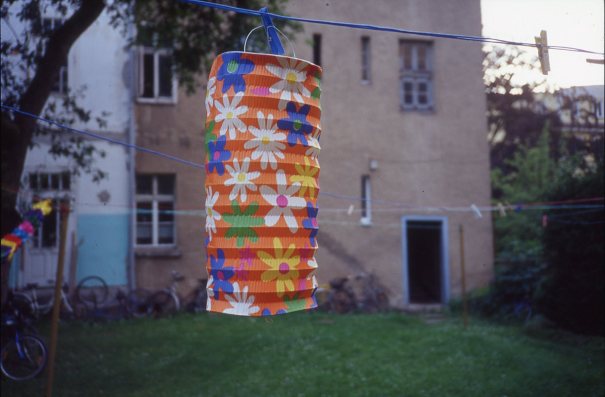 The Deutsche Demokratische Republik: DDR  (German Democratic Republic: GDR), a one party Marxist-Leninist satellite state of the Soviet Union was established on 7 October 1949.  It’s guarantee of ‘legitimacy’ was the Soviet Union and the Soviet Army armed forces.  These forces were used in 1953 to suppress the protests and industrial actions of  DDR workers and farmers protesting against the government imposed working conditions and output expectations.  In 1961 the Marxist-Leninist government built the Berlin Wall, and a national boundary concentration camp  fence that ran from the Baltic in the north to the Czechoslovakian border in the south to keep their own citizens in.   The Stasi, the secret police, meanwhile developed a labyrinth of spying on virtually all the citizens of the Democratic Republic, pressurising, or blackmailing it is estimated, by some, of up to one third of citizens to spy on each other. 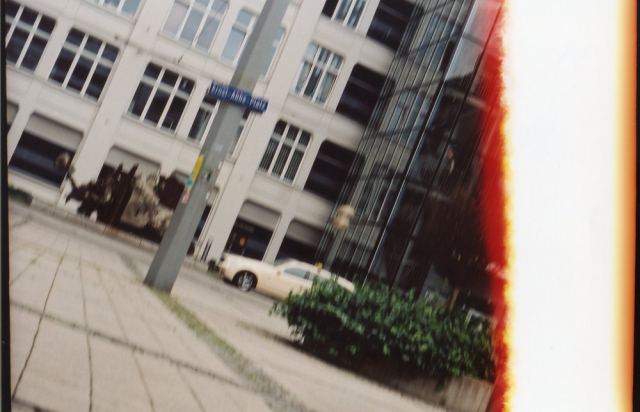 The collapse of the Democratic Republic, along with the other satellite states (Poland, Czechoslavakia, Hungary) became inevitable when the Soviet Union First Secretary, Gorbachev told (in secret) the First Secretaries of these states that they would no longer be guaranteed the armed intervention of Soviet Union forces to uphold the legitimacy of their regimes. 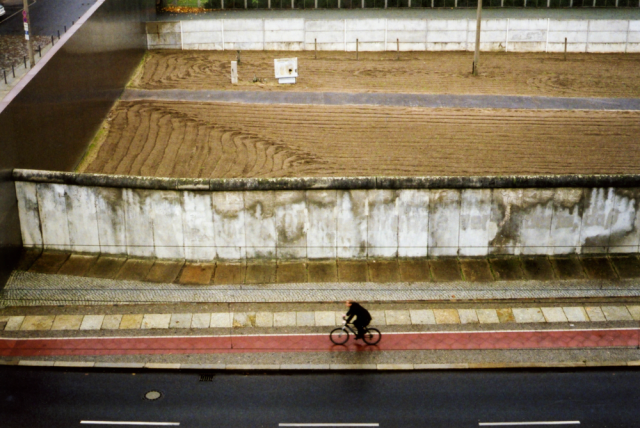 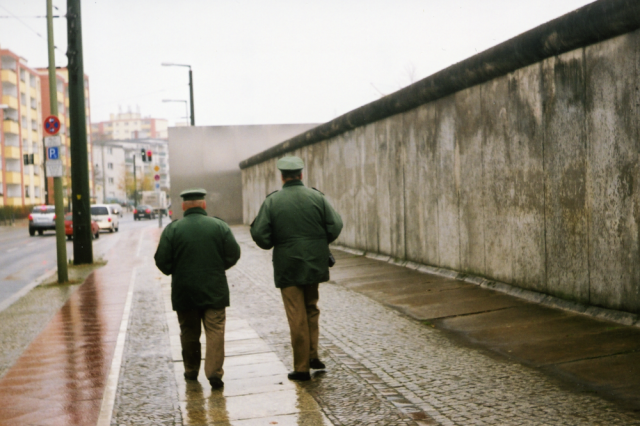 Summer celebrations leading up to the 40th anniversary of the DDR, 1989.      Photo: Harald Hauswald

Four weeks after the 40th anniversary of the founding of the DDR, and with First Secretary Honecker boasting of the improvements that were going to be made to take the Berlin Wall into the 21st Century,  the Berlin Wall was breached on 9 November 1989. In the months following, some of the DDR Central Committee hastened to the safety of Moscow, including First Secretary Honecker, who then, with others, followed in the 1945 footsteps of some German National Socialists, and made their way to South America. Following multi-party elections in March 1990, the reunification of the  West German Federal Republic and the German Democratic Republic took place in October 1990.

From the train, Hamburg to Berlin, passing through the former DDR 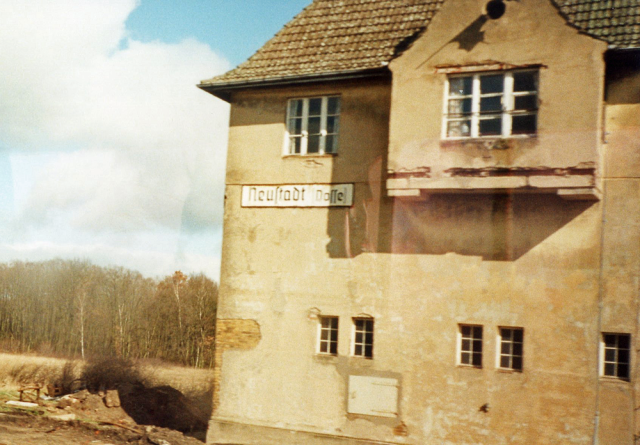 The main railway line between Hamburg and Berlin ran through the DDR and the track was deliberately kept on low  maintenance (it was the main link to the Federal Republic )  by the DDR.  The station buildings , however, reflected the low maintenance of all buildings in the DDR.  In 2000, ten years after reunification, many of the small  farmyards viewed from the carriage window still had a  DDR built Trabant parked next to the tractor. The former DDR border was not so far east of Hamburg, and a sure sign one had crossed into it was the characteristic low slung national grid electricity pylons, that seemed to only just clear the trees in the  meadows and flat farmland.

Berlin FC arriving back at Berlin Schönefeld Airport, following a 3 – 1 defeat against Barcelona, March 2000.   Berlin FC, a DDR team,  almost went under following reunification because of lack of financial support in the new German republic. They clawed their way back and continue to have a strong fan base similar to that of Hamburg’s St.Pauli FC.  Berlin Schönefeld was the DDR Berlin airport.

Schwerin in the former DDR is to the east of Hamburg, and is a comfortable day trip away, using the Hamburg Haupbahnhof to Rostock (on the Baltic) train.  Online picture searches of Schwerin show photos of the ‘picture book’ palace in its large grounds with the lakes.  In 2007, however, away from the Palace – now the administrative centre for the state of Mecklenburg-Vorpomern – Schwerin was a  town that architecturally was a striking  reminder of pre-war Germany, and the post war DDR.  Both eras in March, 2007  were bathed in dust and decay.  One or two streets and their buildings in the centre had been spruced up with fresh plaster and repointed brickwork and bright coats of paint, but round the corner, any corner in town was the reminder of a national socialist and Marxist-Leninist socialist imprint.  A Federal German 1955 manufactured Agfa medium format camera took the pictures. 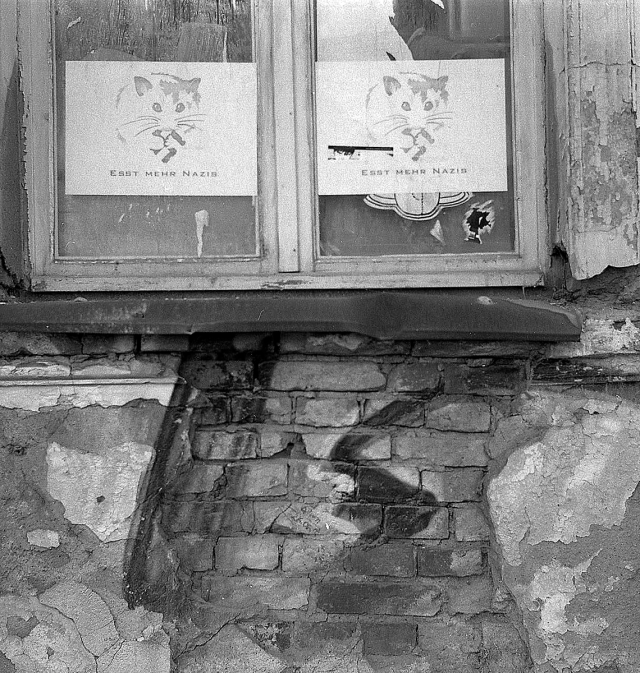 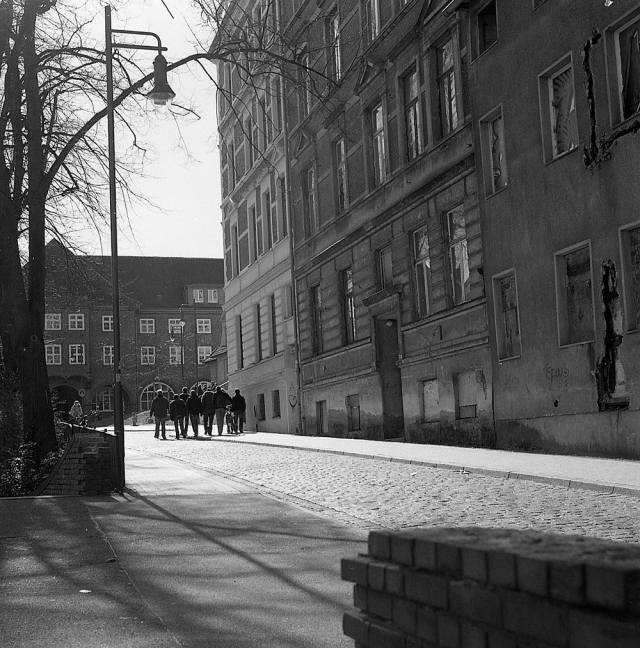 The train from Hamburg was almost like a ghost train – few passengers.  A group of black men (for that is how they identified themselves)  from Africa moved through the open compartment, saying to another group (using English as their common language) that there was  “more black men” near the front of the train.  The got off onto an empty platform in the middle of the flat countryside at a station called Hagenow, 30 km from Schwerin.  It seemed to be stranded in the flat countryside, with a lone round brick tower as the only landmark. My curiosity aroused, I saw from the timetable that I could get off at Hagenow on the return to Hamburg, and pick up another train  an hour later. 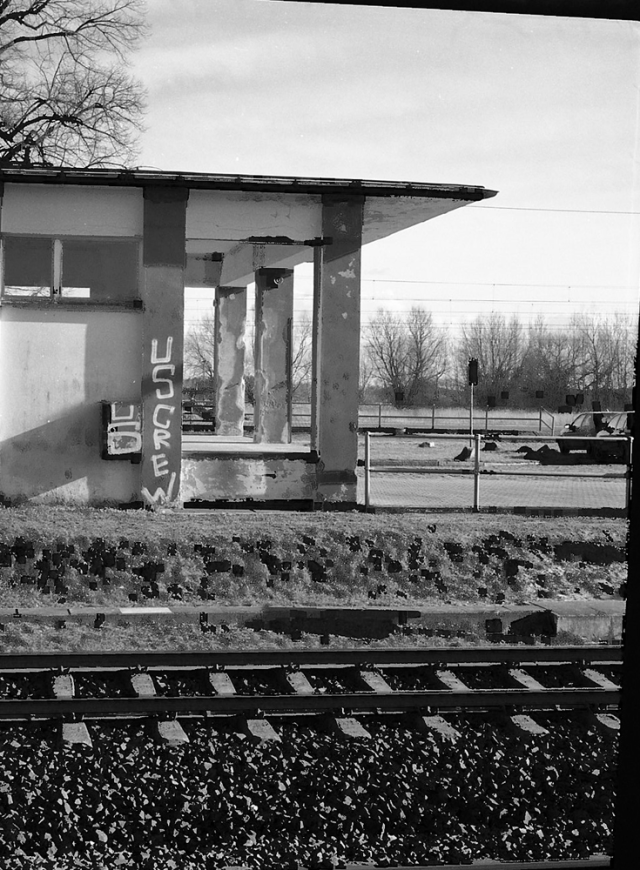 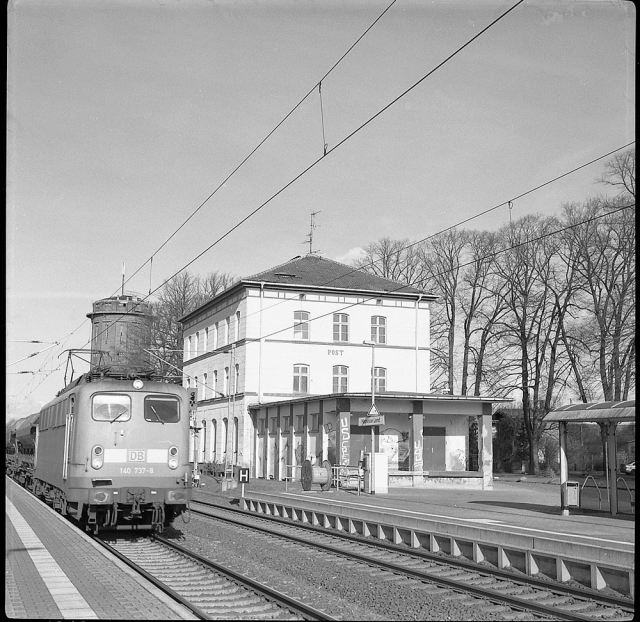 A goods train passing through Hagenow Bahnhof.  The only sign of life. 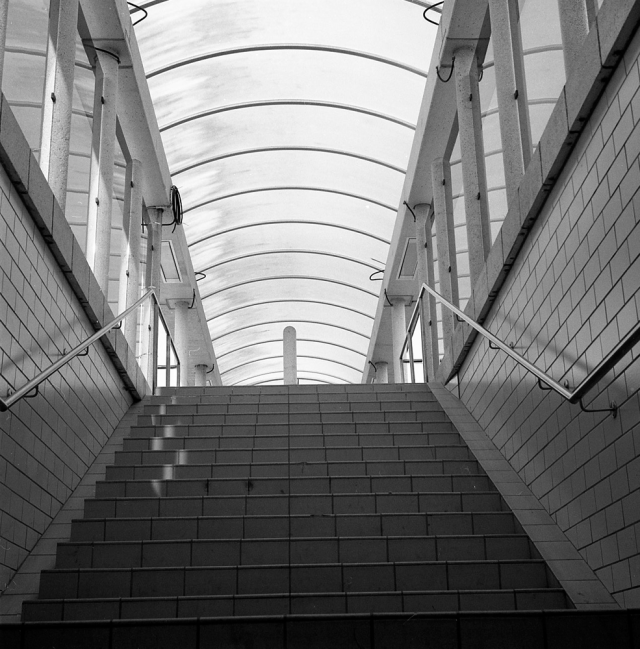 Locked sheds by Hagenow Bahnhof, a few metres across the tracks.  A few more metres from here was a road, a quiet road, and some houses, possibly railway worker, or ex- railway worker housing.  As I was taking this photograph a man in his eighties passed by on a path, and paused.  He liked my camera.  He said that he too used to have an Agfa.  Given his age, it would have been one from before the war, before the creation of the DDR. 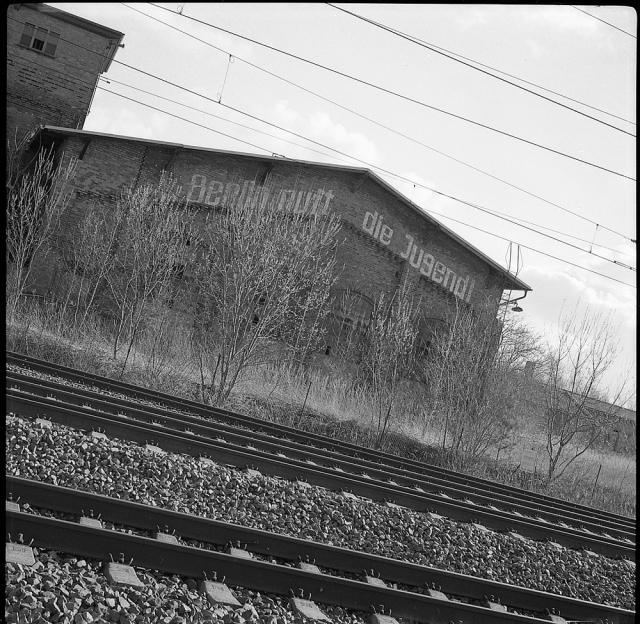 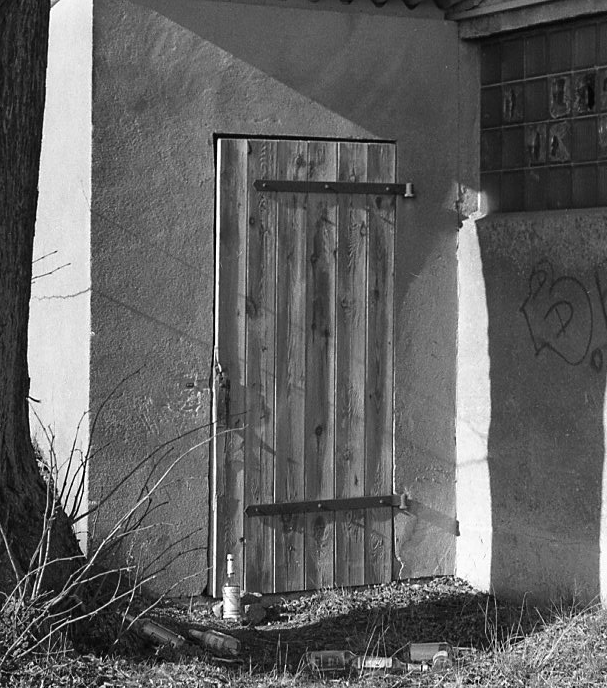 A lot of West German money was being spent renewing and bringing up to date the infrastructure of the former DDR.  Wage earning citizens of western Germany were, and are still taxed (2014) towards the costs of this continuing work.  Examples obvious to a visitor is the upgrading of the railway network –  new stations, track, signalling and rolling stock.  This is one of many, many examples.  However, even eighteen years after reunification, the physical skin of the old DDR was still everywhere in 2008, including Berlin. 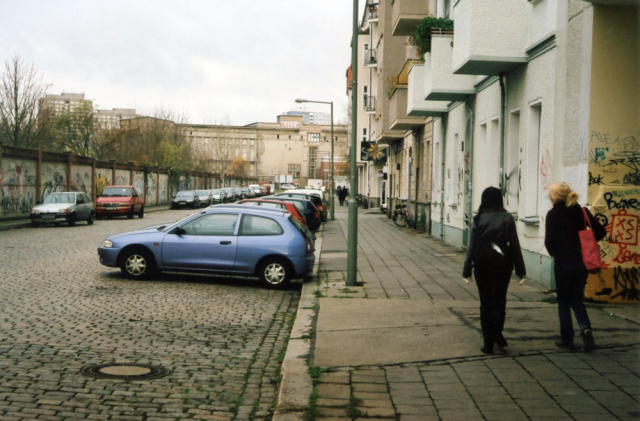 The new Berlin Haupbahnhof  (Central Station), viewed from near the restored Reichstag – the German parliament since reunification.

Fly Me to the Moon, Weimar. 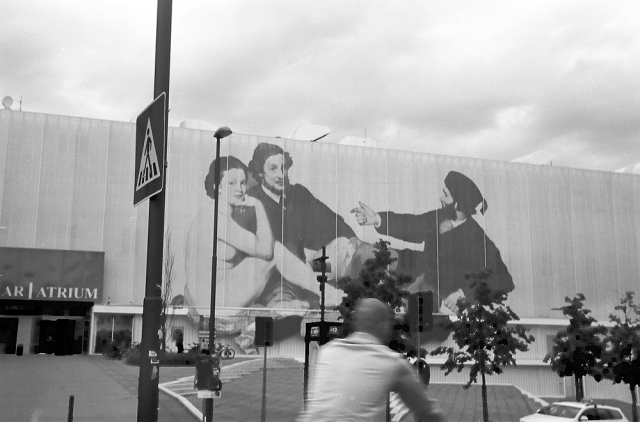 The new indoor Atrium shopping centre, Weimar.  Taken on a 1932 Ikonta, manufactured in nearby Jena.

Nationalist Socialist (Nazi) buildings, near the Atrium indoor shopping centre, Weimar.  In June 2009 they were being renovated, for a possible use as offices.  Although Weimar gave its name to the democratic multi-party German Weimar Republic, 1919 – 1933, it was an early centre of Nationalist Socialist activity and support.  Weimar had a special significance for National Socialists because of the association with Schiller and Goethe, symbols of German culture and civilisation. The Hitler Youth movement was started in Weimar, and it is said that in the 1933 elections 50% of the voting population of Weimar supported the National Socialists. The local No.6 bus to Buchenwald from Weimar.  Buchenwald, and the site of the concentration camp, is on a wooded hill a few miles to the north of the town. However, like other former regional DDR administrative states, Thuringia, which includes Weimar and Jena and Erfurt, a notable number of voters revealingly support Die Linke (The Left) party since its formation in 2007.

The vote for the Left Party, in both elections to the European Parliament and legislative elections within the German federation in 2009 showed a striking split between the former West Germany and East Germany.

“The party was founded in 2007 as the merger of the post-communist Party of Democratic Socialism (PDS), successor to the Socialist Unity Party of Germany (SED) that ruled East Germany until 1989, and the Electoral Alternative for Labour and Social Justice (WASG), a left-wing breakaway from the Social Democratic Party of Germany (SPD).” – Wikipedia

Within the former East Germany there is still a discussion amongst a significant number of people about the kind of society that they want.  Many are unhappy about a society based on profit as a gaol and competitiveness.  Many (and not just some of the older generation) value aspects of a socialist society with its equitable goals.  There was a discussion in 1989 and 1990 within some of the community in eastern Germany that the former DDR should remain separate from the West German Federal Republic, and establish its own multi-party democratic state.

20 years after the Berlin Wall was breached the striking difference in support for the Left Party in the 2009 elections between the former Federal West and DDR East is shown in results such as these, from a sample of former DDR local regions, compared with a sample of former West German Federal Republic regions:

In 2013 the appeal of Die Linke (The Left) in the former DDR was, on the whole, only slightly less.  It is difficult to know whether the slight dip reflects an ageing population dying in eastern Germany, or whether there were other factors at work. 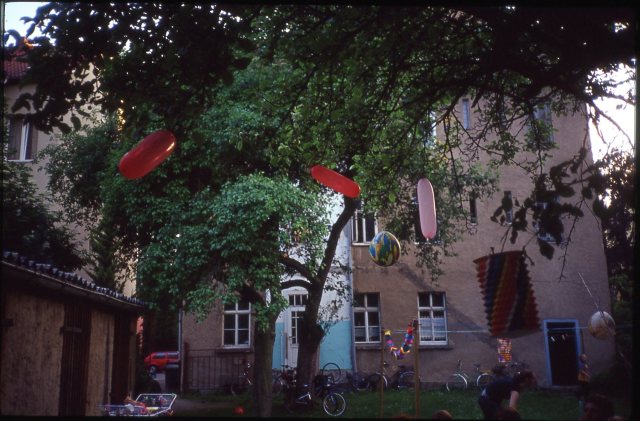 At a Garden Party in Weimar in June 2009 these were some of the issues talked about, along with a resentment, from some, that salaries for teachers, in eastern Germany were less than teachers in western Germany.  This was a reflection of the occasional tensions that occur between Ossis and Wessis.  (‘Easties’ and ‘Westies’) Jena, to the east of Weimar is home to Carl Zeiss, manufacturers of cameras, lenses and optical equipment.  Of the former DDR towns and cities I visited since 2000, it was in the summer of 2009 the one that seemed – superficially to a visitor – the one that was the most vibrant. There were still reminders of the former DDR – a Trabant parked in Carl Zeiss Place, and the monolithic buildings, but there was a freshness too. 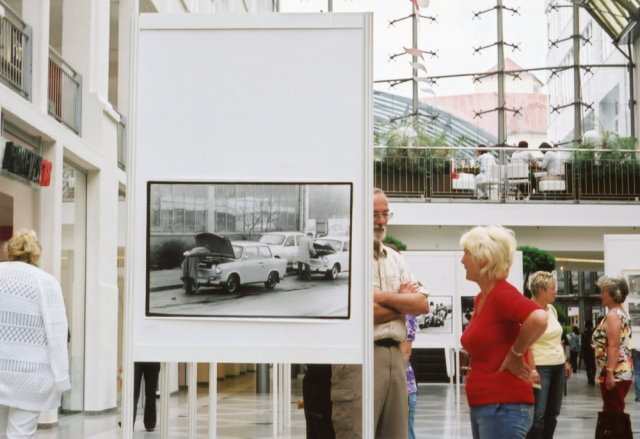 Carl Zeiss optical innovators and manufacturers has been in Jena since the nineteenth century.  During the economically depressed 1920’s it merged with and absorbed other German optical and camera manufacturers to become Zeiss Ikon.  It already had world leading camera lenses such as the Zeiss Tessar lens, and their lenses were fitted on the medium format Rolleiflex cameras.  In the late 1930’s they introduced the Contax rangefinder camera that many  argued was a better camera with a better lens than the Leica rangefinder. (There were reliability problems, due to complex engineering, though).

After the war Jena like the rest of Eastern Germany came under Soviet control and industrial plant throughout the Soviet zone was dismantled and sent back to the USSR, including manufacturing capacity at Zeiss Ikon.  Carl Zeiss with some of its technicians established itself in the south west of Germany, in the Federal Republic.  But in Eastern Germany Carl Zeiss Jena remained, and the quality lens and the cameras that it started to produce again, and develop, were a valuable and desperately needed hard currency export for the DDR.  Unlike most other DDR manufactured products Carl Zeiss Jena cameras – which included the Werra and then the Praktica range, amongst others – were well put together.

When I walked out of the Jena railway station in the summer of 2009 a taxi driver in the stance across the road spotted my Werra and shouted across “Is that a Werra?”  “Naturally”, I replied, and he beamed back.  Since reunification Carl Zeiss has also reunited, manufacturing photographic lenses, optical lenses, specialist glass and other products, either as Carl Zeiss, Jenoptic or Schott AG. 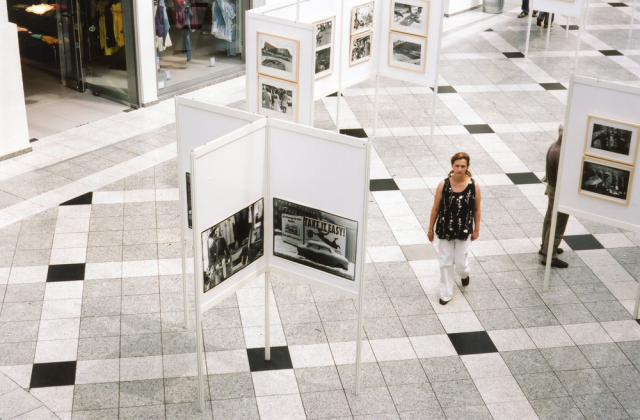 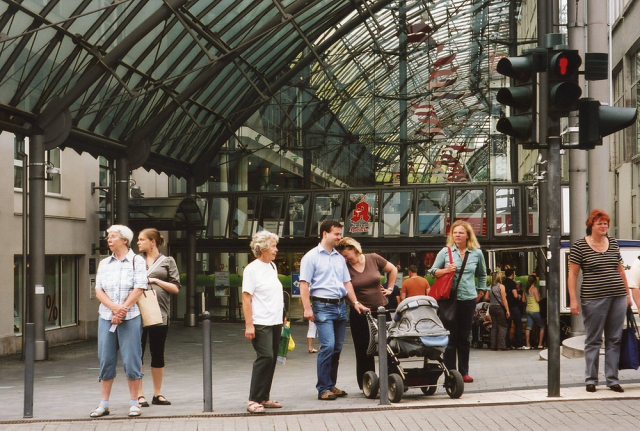 Recommended Feature films that are set in the last decade of the DDR.  Available on DVD with English subtitles (as of 2014). 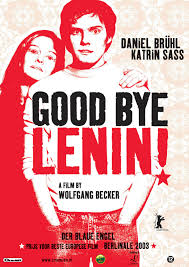 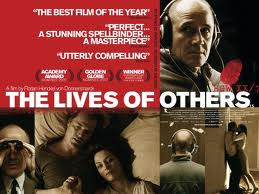 The Lives of Others, 2006, directed by Florian Henckel von Donnersmarck

That Was the GDR.  An engrossing German TV documentary made in 1993, with English subtitles. (From You Tube)

The two German photo essays below will be restored online in the late autumn of 2016.